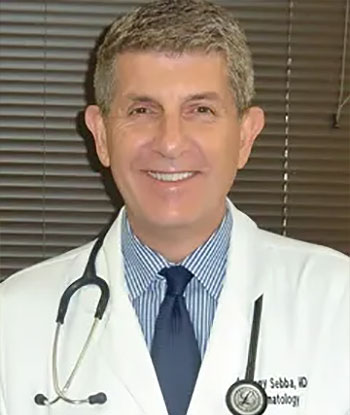 Anthony Sebba, MD, FACR, graduated from the University of Cape Town in Cape Town, South Africa. He did post-graduate training in internal medicine in Toronto, Canada, and then, working his way south, at Albert Einstein Medical Center in New York City and then Palm Harbor. He specialized in rheumatology at Mount Sinai Medical Center in New York and is board-certified in rheumatology. He was in practice in New Jersey, where he was Chief of the Division of rheumatology at Holy Name Hospital, before coming to Florida.

He is an Assistant Clinical Professor in rheumatology at USF, where he attends division meetings.

Dr. Sebba is a fellow of the American College of Rheumatology. He is a member of the American Society of Bone and Mineral Research, an international group of scientists and physicians who are interested in osteoporosis and other bone diseases.

Dr. Sebba has presented research and chaired meetings at the American College of Rheumatology, the American Society of Bone and Mineral Research, and the International Society of Clinical Densitometry. He has lectured at a number of meetings of state rheumatology organizations and also lectures internationally on both rheumatoid arthritis and osteoporosis. In the past two years, his international lecture locations have included Australia, New Zealand ,Mexico,Taiwan, Japan, and Brazil.

Dr. Sebba has been listed as one of the Best Doctors in America® in 2012-2017 and now 2017-2018. This list is compiled from surveys of physicians, asking them whom they themselves would see for treatment. (see Best Doctors Tampa Bay). He was listed as one of “America’s Most Compassionate Doctors” in 2014-2015.

Dr. Sebba is an attending physician at Mease Dunedin and Mease Countryside Hospitals.